Discovering Bosa and the nuragic Palace of Santu Antine under traditions, stories and flavors

In Planargia, in the province of Oristano, there is one of the most characteristic villages of Sardinia, Bosa, which extends along the Temo, the only navigable river in Sardinia. 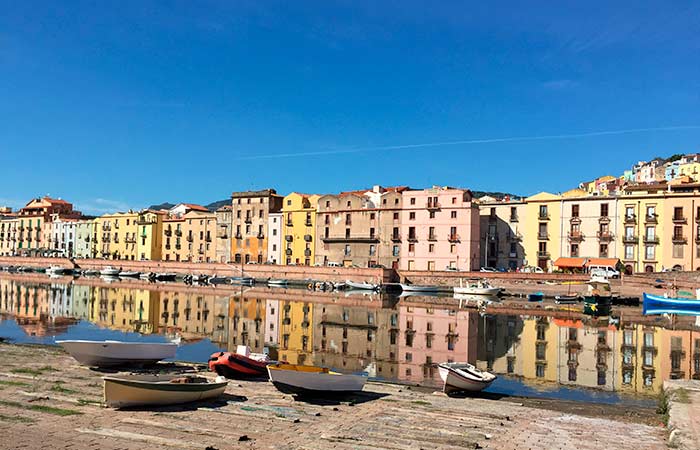 Along the scenic road that starts from Alghero, after about 45 Km of breathtaking surprises, we will have arrived at your destination. Among the most suggestive surprises there is undoubtedly the cliff from the typical volcanic rock of pink trachyte overlooking the cobalt blue sea.

Another surprise will undoubtedly be the lucky meeting of the griffons, which love flying over the coast, gliding through the currents and performing choreographic flights in search of food. Their presence, only here and in the Park of Porto Conte near Alghero, was desired and continually monitored by the State Forestry Corps, which assists them daily and created for them the ideal conditions to make them reproduce.

Once in Bosa, you will immediately be amazed by the structure of the city: two bridges, one modern and one ancient, connect the old village with the modern center. In the ancient side there are two treasures of Bosa: the ancient buildings of the tanneries, now in disuse but which house the Museum of Conce and one kilometer further on the Romanesque church in trachyte stone of San Pietro extra Muros of the eleventh century.

Another characteristic of the village of Bosa that will struck you is surely the Castle of Serravalle built in the 13th century on the homonymous hill by the Tuscan family Malaspina, who settled in Bosa a century before.

During our guided tour you will notice the typical three-storey buildings with their unmistakably windows and portals decorated with pink trachyte frames, cobbled streets with local river stones and numerous artisan shops. Here you will discover the secrets of local craftsmanship: filet and filigree workmanship, which are still kept alive with pride by local young artisans.

You will visit the Cathedral of the Immaculate Conception, an imposing structure of the fourteenth century, embellished with polychrome marble monuments and numerous filet lying on the various altars. The filet, which is a hand-embroidered lace, is an ancient local art that finds inspiration from the processing of the meshes of fishermen's nets. 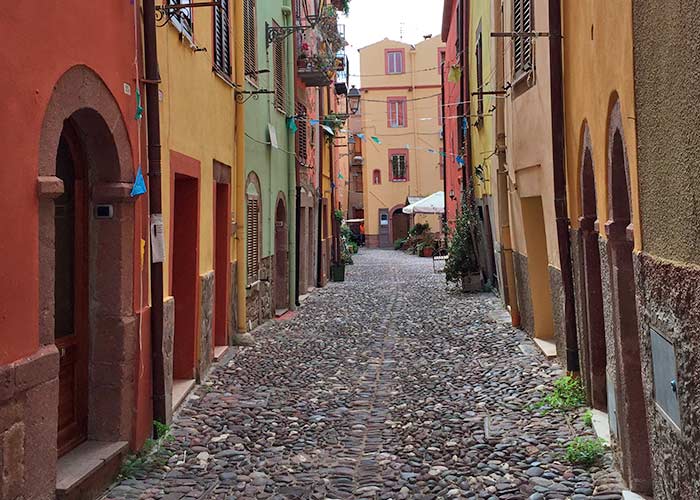 A visit to the Castle is reserved for those who prefer a beautiful walk along a panoramic flight of steps. Inside you will visit the medieval church of Our Lady of Regnos Altos, which preserves numerous original frescoes of the XV century.

From the walls of the Castle you will enjoy a breathtaking panoramic view: the village overlooks the river Temo that ends at the sea along the coast of Bosa Marina. This seaside resort is known for its characteristic ferrous beach.

After this breathtaking view, it’s time to taste a glass of Malvasia, the renowned local wine present in the numerous bars in the center of Bosa. This local specialty is a DOC wine since 1972, has an intense golden color and a full and enveloping flavor and a subtle bitterish aftertaste. It is not to be confused in its originality and organoleptic properties with the other numerous Malvasia present in the Mediterranean.

The Bosana is in fact cultivated in a restricted area of just 27 hectares in the neighboring territory and is known for its long aging of two up to three years.

This variety of Malvasia, which origin is Greek, arrived in Sardinia and specifically here in Planargia and Campidanese between the fifth and sixth centuries AD. During these last years it spread through the territory and it will be appreciated more and more.

After the lunch break, we leave to the largest nuragic Palast of North-West Sardinia: the Nuraghe of Santu Antine in Torralba, with the adjoining village at the Nuraghi Valley. This Bronze Age nuragic structure built from the 15th century BC presents an absolute uniqueness: two monumental corridors that unite the three towers surrounding the central one. Our excursion ends here, but I wait for you to experience other adventures together. 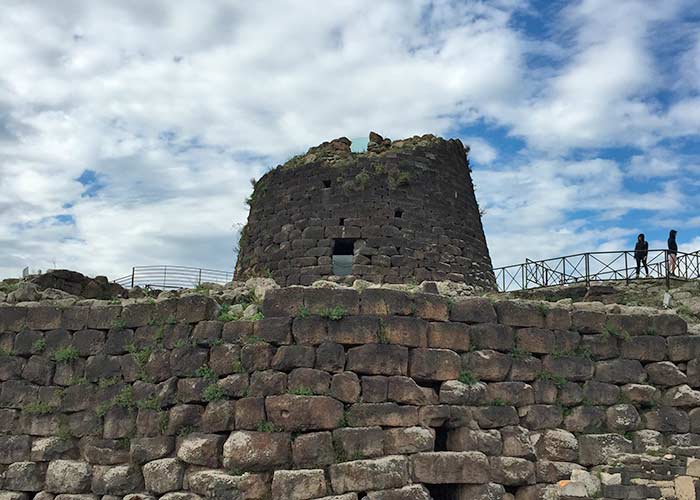 The Barbagia, where to know the "real" Sardinia

In Barbagia we find the most authentic Sardinia with its traditions still alive. In Nuoro we will visit the Ethnographic Museum of Popular Traditions; in Orgosolo we will retrace the historical moments thanks to the murals

In San Pantaleo the unmissable weekly market, the visit of an extraordinary Nuraghe and a stop in Porto Cervo to get to know the Church of Stella Maris

Luogosanto, the sacred medieval village in the heart of Gallura

Visiting Luogosanto means immersing yourself in a spiritual and peaceful place, in contact with the tradition and nature of Gallura.